I had a lovely evening out last night some ribs (I'm vaccinating myself the fun way - with lots of porky goodness - it's Cathy logic, just run with it :), then we went and saw Wolverine. Basically I loved it. Here's a review of what I thought - Please note there be spoilers. 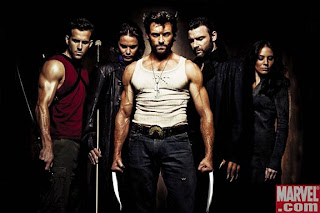 I thought the opening sequence was fantastic. It sets a lot of back ground between Logan and Victor and how their relationship started to change. You get to see Logan (although he's Jimmy at this point - slightly confusing yes), discovering he's not quite human. It was put together really well, I liked the idea of it flowing through the wars, until you're introduced to the orginal line up of Logan, Victor, Wade, Zero, Wraith, Bolt and Dukes and their leader, Stryker.

After Logan leaves the group he moves to Canada, shacks with a teacher (Kayla) and becomes a lumberjack (q the song - you know you want too). Of course, happiness can't last and his lady friend is killed by Victor. In his anger Logan allows Stryker to inject him with the Adamantium and so Wolverine is born and yes ladies, this is where Hugh gets nude and we are given a nice view of his manly hotness.

On the hunt for Victor and the mysterious 'Island' we get to see Wraith and Dukes for the first time in 6 years. Dukes is considerably larger and this section of the movie seems to have been filmed by the Farrelly Bros. The boxing scene is probably one of the funniest I've seen since the midget nut punching fight in Bad Santa. Althought Wraith isn't in the movie much , I really like Will. I. Am performance.

The CGI was pretty good, there were only a couple of times when it was really noticable - where Wolverine has his helicopter fight with Zero and where the kids are running towards Prof. X at the end. I thought it was kinda funny having all the skippys in the film, I was waiting for the rest of the cast of McLeods daughters to come toddling out.

I was all upset that they ruins it fats hobbit the hot boy (Wade). He still had the hot bod, just a rather scary face. When he was Wade, he kinda reminded me of Hannibal from Blade Trinity and his character is definately played for laughs. Well cept for the end where he's Deadpool and all cranky and looks well pissed at being attacked with a sharpie.

It was nice to see the beginnings of some of the more well known characters Cyclops, Sabretooth and Prof. X - although he's looking plastic surgery scary on account of trying to look younger than in the first X-Men movie. I'm not sure how this fits exactly with the first movie, cause when Wolverine and Sabretooth meet in X-Men, it's like they don't have that history (I know that this is because the first one wasn't made it a prequel in mind but I'm just saying).

It would have been good if more time had been used to explore the other mutants abilities/backstories. I understand why it wasn't - the movie's call Wolverine not Mutants. But some of the characters were there as plot devices and not much else. Bolt is really only there to show us how bad Victor has gotten - killing his own kind. I'm guessing that if Wolverine goes well there may be other origin movies or perhaps other X-Men movies. A Sabretooth one would be good, seeing the flip side of Wolverine. But I don't know which other characters could carry a movie on their own. I was cranky that the old couple kicked it, they were cool and it would have been nice to see Logan going back and Clark Kenting it.

Overall, the film was great, I enjoyed the performances. I thought Danny Huston (Stryker), was fantastic. Liev Schreiber as Victor was perfectly menacing and I would love to see him in the X-Men world again. I know this has had mixed reviews. I didn't realise X-Men 3 was so disliked. Where was I when that was going down? I guess, when you think about it, I an very easily swayed by hot boys in lycra. It wasn't my fave one of the series, but it was all good where I stood. But has anyone else noticed Hugh's fancy for playing wolfy characters? There's the four X-Men movies and Van Helsing (although it's only for a blink and you miss it). He also loves the scene where he gets to howl over dead love interest. DAMN...Hugh's sexy time with the ladies seems to be following JCVD lead. Soon there won't be nary a lady left alive. At least Hugh's more convincing with his emotional acting and I'm pretty sure he could kick JCVD ass.

I haven't read any of the graphic novels so I'm not sure how the movie lives up to this (badly I guess, if you go by some of the complaints). One of the complaints was with Kayla and why she betrayed Logan. My take on that is that Stryker would never let Kayla get close enough to touch him to just influence him into letting her sister go. If it was me I'd be gun in hand whenever she was in the room. In the end, Stryker's not thinking straight , so she's able to influence him then.

Either way I liked Wolverine and no doubt I'll go see it again. Here's another look at Hugh, although he kinda looks more GQ than Wolverine with his swagger. Noice. Break me off a piece of that white chocolate. 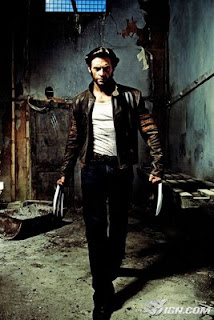