Some motivation for the masses. And hey just a little rant. 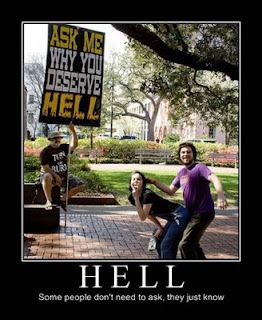 As always, Ollie has come through with the good, here's some more motivational posters. Enjoy :) 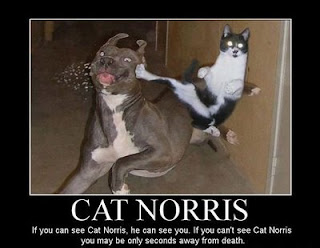 As a little side bar to my funnies, I thought I'd add some ranty thingys. Cause there are some things I'm just so over!

1. Ben Cousins - Like whatevs, who cares seriously? He's just a guy who plays footy and takes recreational drugs - he's not the messiah. If he fucks up again so be it, just don't bother me with it.

2.Octuplet Lady - zzzz...sorry did I fall asleep there? Ultimately, their mother chose to bring them into a 3 bedroom house shared with her parents and 6 other siblings, no money and no income. Let her deal with them/take them away - just do it quietly so I don't have to hear about it anymore. I don't get all the outrage - nobody seems to give a shit about all the other starving, neglected kids in the world, what's 8 more (perhaps that's not the right 'tude to have, but like I said - over it).

3. Slumdog Millionare - It won Oscars - great! Now get over it, move along. It can't possibly be the greatest film ever, nor will it ever be. All the hype is having a negative effect on my feelings towards it - meaning I did want to go see it, now...meh, not so much. Better yet, give all the kids that worked for pretty much nothing some more cash.

4. People who can't drive. It's not so bad in the city, but hot damn, people in Mildura just can't drive. No one wants to let you in, drivers don't want to give way & holy shit, if they can't park out the front of where it is the want to park - outrage. It's called walking people - you should try it sometimes.

5. Mildura again. People who use the sms column in what passes for a paper here using it to air bitchy problems. If you know who scratched your car, go do something 'bout it, instead of anonomously threatening 'I know who you are in the paper'. Then there's the council knocked over my bin and didn't pick it up - GET OVER IT!! There are millions homeless, starving, suffering the after effects of flood & bushfire. There are people being persecuted for their religion or race. Like a knocked over bin actually matters and hey - if you have a bad back and can't pick it up, ask a neighbour instead of bitching and moaning about something so insignificant.

Holy Crap! Obviously I had a saucer of milk for breakfast, cause that's all just a little bitchy. But hey am I bovvad? Face. Bovvad? Face -I's not bovvad & I'm posting it anyway.

Perhaps to soften the blow here's some more funny. Bad taste fer shizz, but it's making me laugh anyway. 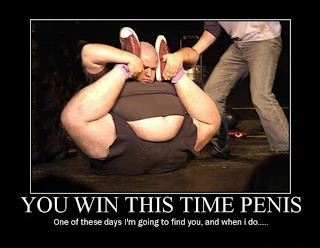