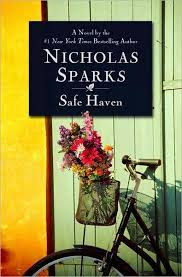 When a mysterious young woman named Katie appears in the small American town of Southport, her sudden arrival raises questions about her past. She’s secretive, on edge. Over time she forms a relationship with the general store owner and his two kids.

I haven’t read one of Sparks’ books for ages, but I really enjoyed this. While it was still romance, it seemed like a bit of departure from his usual. I liked the alternating chapters between Katie and Kevin, giving perspectives from both characters, even if Kevin is a six pack short of a slab. I can’t imagine going through/surviving spousal abuse, but I think Sparks’ writing treated the subject well, it didn’t seem contrived and I thought the relationship between Katie and Alex was sweet. It may be that I haven’t read one of his for a while, but it doesn’t seem as formulaic as some of his work. As any author on a best selling list, he seems to churn them out and I know I stopped reading him because I didn’t think some of the stories were as strong as his earlier novels.
Apparently this has been optioned as a movie and I do love me a Nicholas Sparks movie adaption, I'm still waiting for The Lucky One, with a hella buff Zac Efron to come out.  Popcorn dinner here I come!
C.
Posted by Cataluna6 at 01:33