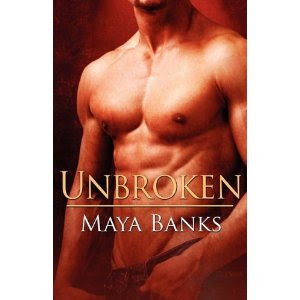 I gotta say I do love Maya's writing, she has the perfect mix of funny, sexy, with great stories and characters I actually like reading about. Unbroken is three novellas, with the central characters all living in the same town.

Jake made the ultimate mistake - falling in love with Ellie, his best friends wife. Distance was the only solution, but it prevented him from seeing what a bastard his friend turned out to be. Now Ellie is free from the bondage of her past, and Jake waits. Needing, wanting, and ready for her when she spreads her wings.

Gracie is tired of the men in her life never fulfilling her vivid sexual fantasies. When Luke overhears her talking about what she really wants, he's stunned - and very turned on. So Gracie thinks no man can satisfy her? He aims to prove her wrong.

Payton is the last woman Wes ever expected or wanted to see again. He's come a long way since their awkward teenage encounter, and his ego needs no reminder. Payton harbours no such reservations about catching up on old times, if she could just get him over his mental block. But that's nothing a blindfold and a little mad seduction scheme can't fix...

How can you say no? I happily said yes, yes, oh yes!

One thing I love about Maya's characters is that the women are nice and sassy, they're not afraid to go after what they want. While there is swooning, they're not weak. And they make me laugh. A lot. I'm often surprised I don't wake anyone else with all my snorting. The other thing I love about Maya's books is they're so easy to reread. Which is pretty much what I did when I came to the end of Unbroken.

Although that did have something to do with the fact that I felt obligated to read both my ebook and print versions, (yes in all my excitement I bought both versions without knowing it), as you get to know me you'll realise impulse control isn't my strong point when it comes to books. Proof in the pudding - I just bought 11 new books, halfway through writing this post - it was all the Maya Banks talk. I HAD to buy her new Kelly Group International series and it snowballed from there. But I digress...

And of course, there's the smexy bits! Maya has a knack for writing HOT sexy scenes, they don't seem over the top or fake, (or course since it's a book we're reading, the boys are always hung and the girls always come :P Maybe not what always happens in reality, but I'm not complaning!).

If you like your sexy books with some smoking hot lovin' and a healthy dose of laughs, I totally recommend this.

And check out the cover - that's some hot manflesh right there!

Oh yes...cause I need me another reading challenge. 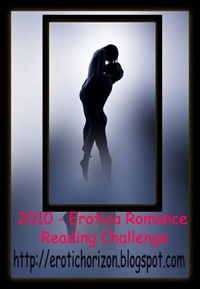 I was playing about on the net tonight and discovered the Erotica Romance Reading Challenge 2010. So I of course thought to myself, 'Self, you don't have enough reading challenges, you're only doing like 5 - what's one more?' So I decided to add another one. Wait I'm not finished, I went a little challenge crazy and found another one - Contempory Romance Reading Challenge 2010.

In all honesty, they would probably be the two easiest of my challenges to complete, I tend to read within this genre the most. Plus I'm thinking it'll be the kick in the arse that I need to finish a few of the books I've bought over the past year - the majority I haven't read yet. When it comes to books, my impulse control is seriously lacking!!

I'm all cited to start and have chosen to read Maya Banks' Sweet Surrender to begin, (thought I'd better get my butt into gear and read the first four before the next one comes out!!).

Thought I'd try something new - The Friday 56 - tonight ima give gonna give you a little snippet from Beast Behaving Badly by Shelly Laurenston, my very handy mouse mat of the moment!

He stared down at her and she stared up at him. She kept smiling even when he didn't. Finally, he asked, "What time did we agree on?"

About the Friday 56 Well that's it folks, my first Friday 56. Le Awesome. Enjoy your weekend kids.

The Brazen Bride by Stephanie Laurens

Before I went away I was lucky enough to receive a proof of one Stephanie Laurens new titles from the lovely people at HarperCollins, yay twitter!! So here's my review - late as usual, but that's just how I roll.

This was released in July, so Laurens readers would most likely have already read this, but if you're one of the uninitiated - I definately recommend giving this book and the rest of the series a closer look. As per my usual lazy self I've used the blurb from the HarperCollins website

They're bold, courageous, resolute . . . ex-officers of the Crown united against a deadly traitor known only as the Black Cobra.

Shipwrecked, wounded, he risks all to pursue his mission—only to discover a partner as daring and brazen as he.

Fiery, tempestuous, a queen in her own realm, she rescues a warrior—only to find her heart under siege.

Bound by passion, linked by need, together they must brave the enemy's gauntlet to win all their hearts' desire.

I haven't read many of Stephanie's books, but I liked this. I hadn't read the first two books in the series, but I was mostly able to follow what was happening with the plot and storylines. Linnet Trevission is not the typical romance heroine. She's Captain of the Esperance, sometimes in the employ of the English Navy. She is living at Mon Coeur, with her rag tag family when the lucious Logan Monteith is literally swept onto her doorstep.

And so begins the next chapter in the Black Cobra quartet, with Linnet's help, Logan may just manage to to complete his part of the mission to bring down the Black Cobra. Sounds dramatic, I know, but it is rather. There's lots of action, with sea battles and sword fights in dark alleys with nasty assassins. All in all it's lots of fun. One thing I didn't like about the story, (without going into too much detail), was how easily Linnet changed her mind at the end. She's all whiny about her independence and not needing a man. Which will totes make sense when you read the book for yourself!! The other thing I'm still not sure about is the relationship between Alex and Daniel (the bad guys), half brothers, lovers??? Far be it from me to deny anyone some bum fun, but I'm not sure what it has to do with the story and it's a bit incesty, which gives it an ick factor. Maybe it makes more sense having read the first two books in the series.

Overall, an awesome time was had by me, it was the perfect way to start my holiday reading. It was a nice change of pace from the other books I'd been reading. Looking forward to reading the rest in the series.