I'm never short of things to read, in fact right now I have a nice stack of new releases just waiting for me to pick them up and settle in. But here's the thing, I'm reading a M&B from 2003. I've got a stack of them, a lady returned them at work the other day and I was all 'WHOA! I must has. I must has right now!'. They're not from authors I read and admittedly, I don't read a lot of M&B, but these just caught my eye.

One features Jake, who's late for a house party and dammit, Marin you're going to be his date whether you like it or not! Then there's a Greek tycoon and also a firefighter, who's hair I liked, (really, that's my sole reason for picking it).

Either way, I'm hoping that this weekend I'll be motivated to delve into the other stack, I've got two Maya Banks (KGI series), two Jill Shalvis (Lucky Harbor) and a Lori Foster series to finish. And then there's my growing stack of ARRC2013 authors that I'd like to read, some that I'm familiar with and some that I haven't tried before. I can't wait for next March - what are the odds that I'll have finished all the books that I bought from last years conference. I'm thinking I've got buckleys of finishing everything.

Like I said...I really am behind on all the reading I need to do. 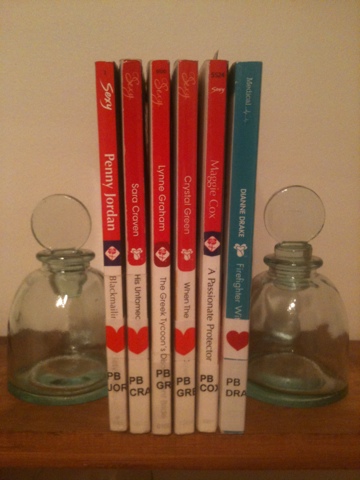 It is truly terrible and I'll eat an apple & some carrot sticks on the way home to make up for it, but below is my delicious dinner - is that ice cream? Yep. And cheats ice cream at that. What do you get when you have a can of top 'n fill and a jar of double thick cream, whipped together then frozen??? Tasty, tasty 'homemade' ice cream. It's easy as that. I had originally made this to go with a pudding I made, but it's so damn sweet I'm still eating it. Next time, I won't add the whole can. 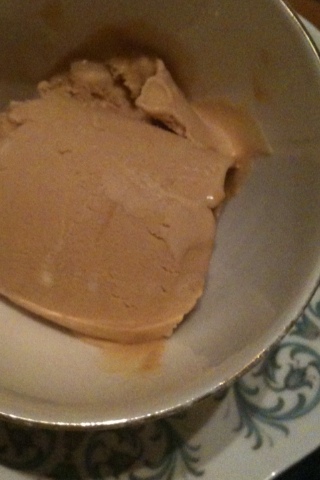 What so you guys think? Like a ladylike amount or are you one in all in?

So what am I talkin' about? Let's get to the books! First up: Taking Instruction by Cheyenne McCray 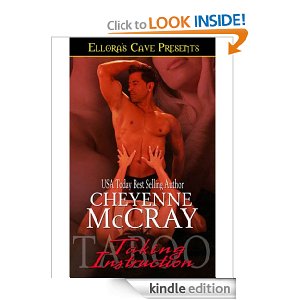 Jessica Grayson is a college freshman who's had the hots for her university professor all year long. He's sexy and unobtainable—and she's determined to get into his bed.
Dating one of his own students is taboo and Craig Bennett intends to never break that school rule… Until he finds an end-of-the-semester present in his office—the gorgeous co-ed he hasn't been able to keep off his mind. And she's naked, sitting on his desk.
It isn't long before Jessica discovers she's gotten more than she bargained for. She finds out exactly who's in control as she learns how the professor likes to play. A whole new world of BDSM is opened up to her and being a bad girl never felt so good. (Blurb taken from Amazon).

Jessica is lusting after her college professor, Craig. It's the end of semester so she decides to go for it. She doesn't know what she is in for! Craig is a Dom and he thinks that Jessica would be the perfect sub...what are they to do with the summer holidays...you guessed it - spank them, (among other things), away! I think I shared my surprise with Jessica - neither of us were quite expecting so many toys.

Please Note: When I downloaded this item, it was free, but when I went to get the pic for my post, I've noted that it's no longer free - I still recommend reading this though :)


Onto my next book: My One by January Rowe 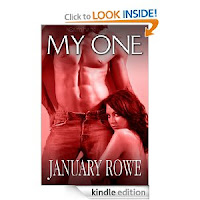 Love knows no limits…
Briony considers herself easy to please. All she wants is a Dominant who’s wickedly creative and completely devoted to conquering her—and only her—with joy. She has everything she wants until her Dom takes on another girl. Bri delights in fantasy role play, inventive toys and bondage at Hell Mary’s BDSM club, but she doesn’t do poly.
Now she’s on the hunt for a new play partner who’ll give her exactly what she needs. A little flirtation with Hell Mary’s Dungeon Monitor is just the thing to ease her back into circulation—except the hardass wrapped in khaki treats her like she needs protection.
Behind his imperturbable DM mask, Chris has eyes only for Bri. It’s his job to make sure things don’t get out of control at the club. Despite her bravado, Bri’s broken heart is like a target painted on her back. She needs to learn some things on her own, but when a private scene goes too far, he can’t wait any longer to step in—and show her she doesn’t need fancy trappings.
His body is more than enough.

What I really wanted from this story was more from Briony and Chris, in the end I felt that their story was an afterthought - a "and she lived happily ever after with him...no wait him." Which I know is kinda unfair on my part; I know what Rowe was aiming for, Briony searching for her 'One' and finally finding him. It's just that so much of the story was spent elsewhere.

The other thing I really didn't like was the type of kink, Briony likes pain, there's fire play in this book and a rather nasty ex boyfriend/Dom and for me, I was cringing throughout the middle of this book. I was so focused on the 'ow' part of things to enjoy Rowe's writing. That said, I did enjoy the beginning of the story, when Briony is still with Ridge, there's a very creative snow scene, and I did like Chris as a character. I just wish there was more of him!

Please Note: Again, when I downloaded this item, it was free, but when I went to get the pic for my post, I've noted that it's no longer free.
There you have it for another Tuesday, next time I'll make sure I pick stuff that's still free!
Enjoy you're day
C.