Just when I thought the year couldn't possibly get any crapper, I came home tonight to find my girl had passed away.  She was only 8 years old, but in the last year or so she'd had a heart murmur.  That, of course, doesn't make it any easier.  She was such a cheeky girl, she loved snuggles, river walks, beef sticks and belly scratches.

She was possibly the most co-dependant, stuck to my side, I'll go where ever you are puppy I knew, but that was just how I loved her.  Many a Saturday morning was spent, lounging in bed, snuggling with Sam, reading my book and getting kicked in the ribs each time I turned the page, (which was Sams way of telling me"keep patting me dammit!"). 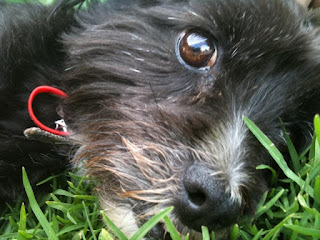 Seduce Me by Cheryl Holt

This review was originally completed for the Australian Romance Readers Association.  I was given an ebook version of this title in exchange for an honest review.

He had it all but always wanted more...

Lucas Merriweather grew up rich, spoiled, and entitled. He thrives on pleasure in his personal pursuits. But with his father's death, he's suddenly thrust into the role of family patriarch and CEO of their vast global holdings. When his estranged grandfather dies, Lucas learns that — shortly before his death — the elderly man married his young, sexy housekeeper and left her ten million dollars. Lucas is positive the woman is a con artist and thief, and he's determined to get back the money she stole. He'll do whatever it takes to win in the end.


She knew what she wanted and just how to get it...

Faith Benjamin takes in strays — people, pets, kids. Growing up an orphan, she understands the importance of loyalty and connection. When she bonds, it's forever. As she begins working for aged, dying, Harold Merriweather, he proposes marriage, but the union comes with more than a small fortune. If she accepts the money, she accepts the Merriweather family secrets too.
Her decision to wed puts her on a collision course with Lucas who's quickly intrigued. Is she the gold digger he expected? Or is she someone else entirely? He can only think of one way to strip away her layers and get to the truth. But when attraction is the bait and lust the fuel, seduction is the only game to play. And Faith is a master.
Lucas may have finally met his match.


This was a short and ultimately sweet novella, fast paced, with the story moving along nicely, it was a quick and easy read.

I loved the first time we meet Lucas and Faith, it’s a case of mistaken identity, with very amusing results, all at Lucas’ expense.  Which to be honest I didn’t really mind as I didn’t like Lucas at first, he was a bit of a douche.  But as the story unfolds, you get to know him better.  Holt has managed to write the character of spoilt, self serving Lucas perfectly.  He’s impatient, rude, and expects everyone to be in awe. But it’s not until you get to know him that you realise that is how he wants everyone to see him, that it’s safer to not let anyone in.  Because letting someone in, caring about someone will only end in heartache.

Faith is very much as the blurb says, caring, kind and she doesn’t like to see anyone hurt or taken advantage of.  I enjoyed Faith’s scenes with Bryce and Peanut, they showed her caring side.  Both she and Lucas have had childhoods that haven’t been the greatest, but it’s only made her more considerate and forgiving.  She’s a strong ‘mama bear’ type character, which is one of the things I like about her – but she has one weakness – Lucas Merriweather.  But what a weakness to have!  There are some hot, hot scenes, but nothing too explicit and I love how Holt builds up the tension between Faith and Lucas and the first time they’re together had me laughing out loud.

As always with stories like this I did get frustrated that the couple doesn’t tell each other the truth, that they allow lies to get between them, especially when Faith and Lucas know what the rest of their families are like – but really, what’s a little romantic angst between friends!  It wasn’t until after I’d finished Seduce Me that I realised it was the first in a new series, so I’m hoping we’ll get to revisit Faith and Lucas in their happy ever after.  Seduce Me was a very enjoyable way to pass a couple of hours.

What does everyone have planned for their weekend reading?  I've got a Maya Banks that's calling my name...