On the road again...with some Weekly Hot Boy no less!!

It's that time again - when I have to spend the week on the mobile library. Which I don't mind, cause it's nice to get out and about, see some of the country & have a chat with different patrons, plus I get to catch up on stuff. But on the other hand, it's a week away from home and I miss my peeps. Plus tomorrow is St. Paddy's day (and Mum's birthday - HAPPY BIRTHDAY MUM!!), and I did have big plans to celebrate the day, which now have been scaled down to me drinking some Guinness & watching Boondock Saints in my motel room - classy!! - not that there's anything to complain about there :) Now since I was awfully neglectful last week & there was not weekly hotboy, I'm bout to do my darnedess to find a picture of the Boondock boys. 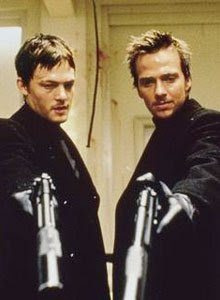 Why hello salty goodness, I do like these boy & wish that they would make the sequel that's been talked about for oh so long. Why do the hot boys tease me so??? If it ever gets made, finger's crossed it's as good as the first, I'd hate to see the stuff it up. Apparently it began production in Nov '08, but who know's how long it will take, specially since it's been 10 years since the orginal.