The explaination of Remeberance Day was taken from Wikipedia.

Remembrance Day – also known as Poppy Day, Armistice Day (the event it commemorates) or Veterans Day – is a day to commemorate the sacrifices of members of the armed forces and of civilians in times of war, specifically since the First World War. It is observed on 11 November to recall the end of World War I on that date in 1918. (Major hostilities of World War I were formally ended at the 11th hour of the 11th day of the 11th month of 1918 with the German signing of the Armistice.)

I thought I would dedicate today's post to Rememberance Day - it's the 90th anniversary this year. I was reading in the paper today that there are only a couple of men who served in WW1 left. It's often easy to forget the sacrifices that our men and women of the armed forces make, both in the past and present, which when you think about it is very sad. Many of them gave their lives for us and I often think that this fact isn't truly appreciated or understood. So here's my little tribute to you. Because if you really think about it, if it wasn't for you guys , I probably wouldn't be blogging, speaking my mind and living as a free citizen!! So thanks again, for your sacrifice, I get to truly live my life how I want to without having to answer to anyone. I'm free and that really puts a smile on my face. 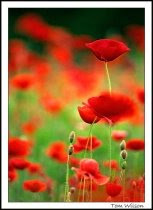 It is also the 233rd birthday of the US Marines, so Happy Birthday!! I hope you have a truly fantastic celebration worthy of 233 years! I'd like to give a special shout out to my first adopted solider, A. - although thankfully he is now safely home and to my new adoptee, M. (although I'm not sure that she's a Marine), but not to worry, she gets a BIG thankyou anyway!!!! :) Smiley faces all round bar keep, (a few brewski wouldn't go astray either).

If you would like to adopt a soldier click here: Soldiers Angels , that way you too can let a soldier know that you care :) Right on.