Book Review - The Lady in Red by Fayrene Preston

I found this in the swap box at work this week and was very excited, (see my earlier post here), but sadly it didn't quite live up to expectation. 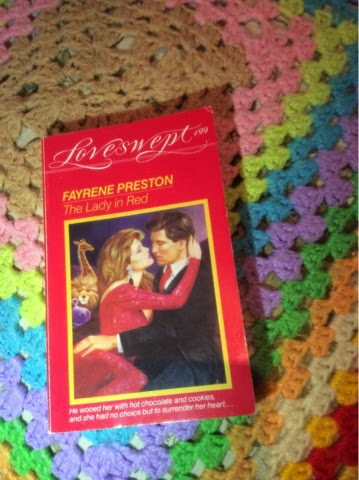 It's about Cassidy Stuart, a journalist trying to work her way up the ladder at work.  Zach Bennett designs and manufactures toys at the company he started when he was younger.  Cassidy gets a tip that someone is going to steal and sell Zach's new video game...but if it's up to Zach, the only thing that's getting stolen is Cassidy's heart (I know - I should totes get a job writing blurbs!)

The basic premise of the story was fun, it's a case of mistaken identity the first time they meet,  Cassidy thinks she's meeting her source, Zach thinks she's a high class call girl.  It was pretty cute up until then, but I thought it was a little creepy when Zach finds out her name and address and then goes on to stalk her for the evening.  But it's all ok, because he likes her, wants to spend time with her and he's harmless!  She questions it, but then it's never mentioned again.

That was probably my big issue with the book, I just didn't get the author deciding to treat stalking as a joke.  On the ick side, this was written in 1991 - apparently condoms weren't the 'in thing' at that stage, so there is the obligatory 'he emptied himself into her' line.  I hate that saying, it makes me cringe, I mean what is she, or anyone on the receiving end of some baby jam - a bin?  The other thing I didn't enjoy was the instalove. It drives me barmy, especially when it's not done well.  Reading this, it felt like the story was told over a week and at the end of it - declarations of love.  Can I get a WTF!?  I don't get it, lust sure, but love, not so much.  Maybe it's the cynic in me.

When we finally meet the source, Zach dubs him 'Deep Teddy Bear', which had me raising my eyebrows.  I don't know if it was the author trying to show us that Zach's a big kid, but it did make me laugh.

There were some funny quotes:

"He enjoyed mysteries.  He loved Christmas ornaments. He was enticed by ladies in red."

My fave by far was: "Zach, a man with dreams in his eyes and stuffed animals on his bed."

And I did love the creeper stuffed toys which kept multiplying every time Cassidy woke up.  She opens her eyes and there's a lion eyeballing her, another time it's a giraffe.

It wasn't fantastic, I certainly wouldn't read it again, but it was a quick, easy read and I had fun with the cover and the tag line.  I gave it 2 stars.

Did you read anything fun over the weekend?