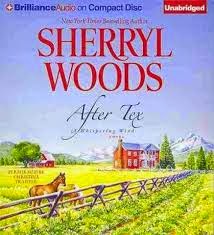 Blurb from Goodreads:  Megan O’Rourke’s beloved grandfather had always been determined to lure her out of New York and back to their ranch in Whispering Wind, Wyoming.  Now his will makes it impossible for her to refuse.  She’s named guardian of Tex’s daughter — a daughter Megan never knew about!
Jake Landers has also come home to Whispering Wind. After leaving years before under a cloud of suspicion, he’s returned to put down roots.  When he comes face-to-face with the woman who shares his troubled past, he hardly recognizes the driven powerhouse Megan has become.  Now she has big decisions to make — about life, love and where home really is.  Jake’s only too happy to help Megan rediscover their old dreams — and maybe this time, fulfil them forever.

This was fun to listen to, especially after the schmozzle of the last audio I listened to.  Megan is fun and sassy, I love when the H/H have that snarky, 'you drive me crazy, but I want to kiss you anyway' relationship.  I also think it's great that Megan didn't need Jake to fix her problems.  There's nothing worse when the hero comes along and fixes everything so the heroine can just sit down and not worry her pretty little head.  I get so frustrated when this happens, especially when the heroine has been so strong up to that point.

I liked Megan and Jake, both together and as characters on their own.  Megan is smart, intelligent and knows what's what.  If it wasn't for his bad boy reputation, you'd think Jake was Whispering Winds, boy next door, he's always willing to give people a hand, which stems from his back story, he had it pretty tough as a child.  Woods really bought Whispering Winds to life, the characters were interesting and varied.  Many of the towns people were mentioned.

There were multiple story lines going on in the book, and while I did enjoy all of them to a certain extent, I think there were some that were only there as devices to move the story along.  For example, Barbara Sue and her abusive husband Lyle - I felt like it was there so the book would have a 'big bad', when there was enough going on with other main characters to not have be so prominent a story in the book.

Tess, through no fault of her own, was a character that I didn't love.  I understand she was a scared girl, alone again and very unsure of those around her, especially Megan.  But I got annoyed with some of the stunts she pulled, that said, she was a well written, believable character.  I'm getting so crotchety in my old age - pipe down kids - granny needs to sleep!!

There are two other things that I got frustrated while listening.  First the ranch, who was running it?  I know it's supposed to be fully functioning ranch and Megan had hands to run things, but beyond a couple of quick mention there was nothing.  I think it would've been good to have some sort of interaction between her and the foreman, even just to illustrate how much she had on her plate and because it was Tex's wish that she be more involved.  And for me, Megan setting her married friend, Peggy,  up for a little flirtation was distasteful.

I enjoyed the narration, Christina Traister has a great voice, it wasn't monotonous, which can ruin even a fantastic story.  There weren't accents as such, but each voice was easily recognisable and fit the character.  Overall, this was an enjoyable listen, and I'm looking forward to delving back into the town of  Whispering Winds with Angel Mine.

Have you read this series?  What did you think?  Or maybe you've read something else by Sherryl Woods, I'd love to know how her other books are.