I can has DVDs?

I got to watch a couple of DVDs on the weekend, the first being The Rebound, with Catherine Zeta-Jones and Justin Bartha. I actually enjoyed this a lot. Yes it was predictable, but I thought it was well acted and funny. 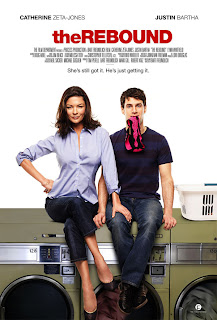 The Rebound centers around Zeta-Jones character, Sandy and her move to New York with her two children after she catches her husband cheating. Enter Aram (Bartha), who helps by looking after her kids as she re-enters the workforce. As time goes on they get closer and closer, but is their relationship the real thing or just a 'rebound'.
This is one of the better chick flicks I've seen recently, as I mentioned before, it's well acted and that is partly due to the two leads having actual chemistry, their getting together was believable *I'm looking at you JLO and Ralph Fiennes - I still haven't gotten over the scary mismatch that was Maid in Manhattan*.
The kids add the funny and the awww and both have some great lines of their own - in general the supporting cast was great, with some scary cringe worthy screen time from Supermans dad (John Schneider).
The thing I hate most is the undies in his mouth on the movie poster - I just think it's ick, I know what they're trying to convey, but eww! One other thing is the ending, it's not as sctrong as it could've been, without giving anything away, it leaves it open to personal interpretation, but I was looking for something more. Overall, I enjoyed this a lot and was perfect reward after looking after the terribles for the evening. I'd definitely watch this again, always a good sign in my book.

Then I watched this: 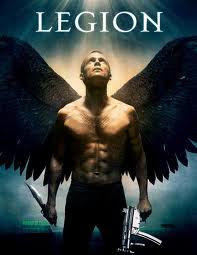 I knew this was going to be bad, I'd heard it was and fully expected it to be so when I first saw the preview. But seriously, what more could I ask for - angels - check, crazy apocalypse - check, hotboys - check, check, check, explosions - CHECK, evil children - shudder (and check).

Legion is the story of an angel (Paul Bettany) who comes to earth the protect a baby, so that humanity has a chance at survival. God has grown angry with us and rather than a flood this time, he's given the order for angels to destroy us. Enter one small diner/mechanics in the middle of the desert (the closest town being an hour away). Charlie (Adrianne Palicki) is a young girl, pregnant with the saviour of mankind. Jeep (Lucas Black) isn't the baby daddy - but he wants to be. He and his father (Dennis Quaid) run the diner where she works. When everything goes down, everyone has to band together to protect Charlie and her baby, while trying to keep the possesed out and them selves alive. In the mix is cook Percy, Kyle - who's lost and the unlucky family whose car has broken down.

For a movie with religious backstory, it has no real mention of religion - beyond God being angry with us, hence sending angels to destroy mankind. I found this kinda annoying, I think it would've added to the story if more religious explanation was added to the story.
And while there were plenty of explosions/gun fights, I would've loved to have seen more fight scenes, there is one which is pretty awesome - who knew angels had bullet proof wings y'all. The angels themselves, or should I say the possessed, are fairly scary, the ice cream dude reminding me a little of The E 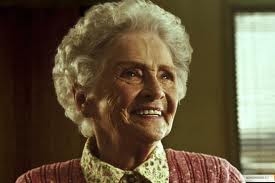 xorcist when the girl comes down the stairs, spider style. As the movie went on they became fairly standard bad guys and less scary, so there was the possibility of these being a lot more menacing with some more thought from the writers.
And seriously - who doesn't love evil nanna, she is awesome! I think she may even be my fave part. Even when she was all "aww cute when's you're baby due", smile plastered on her face I was all "bitch is crazy evil." See picture above - proof that GRANNY IS EVIL. If that's not scary I don't know what is.

This was predictable, and maybe because I didn't have high expectations, I didn't feel so let down, but there are quite a few flaws that would've been easy to fix if the movie had been given a bit more thought. And as much as I love Lucas Black, I was more than a little confused as to why his character had a Southern accent - I know that he refuses to change his accent, but perhaps another actor could've been used when none of the family had any connection to the south.

Did I love it - no, would I watch it again - hell yeah. Because in all honesty, I'm a huge fan of the craptastic and that's really what this is. Gorgeous, glorious, craptastic fun.
C.
Posted by Cataluna6 at 14:38