After my vow to not buy any new series in 2012 and to finish as many off my Mt. TBR - what did I do - I went and bought a new series.  Kind of!  After reading a review of the second installment in the series on Awesomesauce Book Club, I was all "I just have a little peek" on Amazon.  What I found was an interesting take on on a book series.  The author, Evelyn Lafont is releasing her new book in serial format.  What does that mean fearless reader...it means that Pack Mistress #1 was released in late December, PM #2 in January and from February onwards another installment will be released every second month.

Huh?  I hear you say.  Which was kinda my thoughts at first.  When I love a book, I just want to read it all, in one big gulp.  But what if I could extent the fun over the year?  And that's what Lafont has done, taken a normal length book and split it into bite sized pieces, each around 30 pages.  With all the other things I had to do over the weekend, (rather than pack all my stuff - I'm tempted to chuck it and start again!), all I managed to read were the two excepts.  So this was perfect for me.

So just what are you in for if you decide to read Pack Mistress...some very sexy werewolf action - in and out of the bedroom, an angry phone stalker, some forbidden love, one tired pack mistress, (I'm not sure how she does it!), and a little art appreciation. 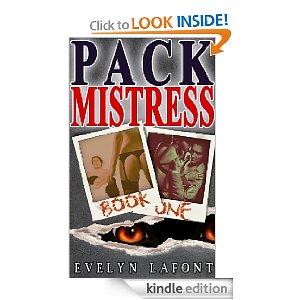 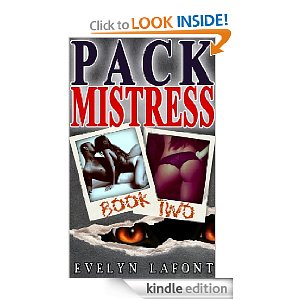 All werewolf packs need a sexual outlet. For south Florida’s Red Wolf pack, the sexy, liberated and infertile werewolf Lorena is it.  Not your average Were, Lorena satisfies the males like no other wolf can. But as much as she enjoys her role as pack mistress, she longs for something she’s never had. A mate she can call her own…

I enjoyed both of these, read one after the other.  Lorena is a well written character and I look forward to seeing how she progresses as the book unfolds.  It's an interesting premise, having a 'pack mistress', something that I haven't come across before and while Lorena is supposed to be subsurvient, Lafont has written her as a strong woman, which I like.  Yes there is a lot of sex for such a small book, but it's creative and well written.  I'm hanging out for more of the art gallery and another encounter with R.W - who I'm guessing is going to become somewhat of a fixture for Lorena.  Roll on February, I need a pack fix!  Until then a reread wouldn't go astray - always a sign of a good book.

As you can see, I got the pics of the covers from Amazon.com and here's a link to Evelyn Lafont's site, where you can read an excerpt of Pack Mistress.

Until next time, enjoy.