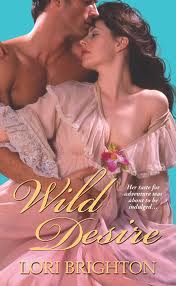 
First He Drove Her Mad
In what feels like a moment, Beatrice Edmund goes from being a proper lady cooped up in a stuffy Scottish castle to travelling miles from anything she's ever known, in the midst of the wildest adventure of her life. And at the centre of that adventure is the most infuriating, puzzling scoundrel on earth. She cannot take her eyes off him.

Then He Drove Her Wild
Colin Fitch cannot deny he's drawn to Beatrice--but lust is all he could possibly feel for the sharp-tongued minx. Still, if there's a chance she can help him stop the madman he pursues, he must withstand her obvious disapproval. Yet withstanding the longing he feels for her is growing more troublesome by the second. . . And Colin has never been terribly good at staying out of trouble.

The blurb was taken from Amazon.com.  I received this book for free, from the author through goodreads.com.  So thank you Lori – it was fantastic!
This was the second book in the series, I hadn’t read the first when I started this, but while I’m sure it would’ve filled in more of the background of the story, Wild Desire was okay as a standalone read.  That being said, I’m now going to go back and read the first one, (Wild Heart).
This was a lot of fun, kind of what you might get if you crossed Indiana Jones with a romance novel.  Lots of swashbuckling adventure and swoony romance.
I liked both of the characters, they were well developed.  Bea isn’t your typical shrinking violet, she’s innocent about much of what goes on in the world, but at the same time she wants to get out there and have adventures.  I enjoyed her headstrong nature and her pluckiness.  She was a fun character to get to know.
Colin is rather lovely as well, a little bit anti-hero, in the beginning he’s more interested in finding the treasure he’s after.  But as the story progresses and Bea and Colin grow closer his priorities change.  He’s very much the ‘man’, cocky, stubborn and he quite likes to push Bea’s buttons.
I love when the two of them first meet - he’s rolling drunk and she’s buck nekkid!  The main characters have great chemistry together and I really enjoyed the way they bounced off one another, whether it was in teasing or flirting.  Both characters have been hurt in the past, so it was great to see them deal with what held them back and move forward in their relationship.  I started this on the plane heading to ARRC2011 and I spent the whole plane trip cackling like a crazy lady – all signs of a good book in my mind.
There’s lots of lovely tension between the couple, one scene that springs to mind is when Colin and Bea get caught up in a street riot, and Colin has to cut Bea’s corset off – just mmm wow! Smoldering comes to mind and when their consummation scene finally comes around – hells bells, it was sexy, sweet and heartbreaking all at the same time.
One thing I didn’t expect was the paranormal theme running through it and to be honest it doesn’t take over the whole story, it’s only hinted at in the beginning, if anything it added to the adventure and danger that Colin and Bea were in.  It isn’t mentioned at all in the blurb and I only found out ahead of time because I’d read another bloggers review of the book.  The paranormal element is explored through Colin’s back story as the novel progresses.  I would assume if you were reading this after the first book, there would be more knowledge of the paranormal side of things, but as I said earlier, it doesn’t detract from the story as a standalone or if you’re reading them out of order.  If you don’t usual read paranormal, this would be a great introduction to it.  The story at its heart is a historical romance, but it has lots of adventure and the paranormal helps to complete the novel.
The only thing I don’t think gelled was the use of some of the language, towards the end Colin swears – shit, I think – nothing too out there, but it didn’t seem to fit with the story and on occasion Bea used ‘British’ insults and it seemed that these were only used because the character was from England.  Nobody else may think anything of this but I know as an Aussie, people think we talk like Alf from Home & Away – think gratuitous use of cobber, stone the flaming crows, maaate, or you could listen to any number of Kevin Rudd’s speeches – he used slang quite a bit.  It kind of pulled me out of the story a bit, but it was the swearing more so.
Overall, this was so much fun to read and I’m really looking forward to reading Wild Heart.  It was a fun, easy read, perfect for my holiday and it really set the tone for my holiday – lots of fun and adventure.  It’s a great historical romance and I really enjoyed the paranormal elements of the story.
C.
Posted by Cataluna6 at 17:50