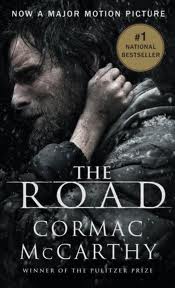 The Road by Cormac McCarthy


A father and his young son walk alone through burned America, heading slowly for the coast.  Nothing moves in the ravaged landscape save the ash on the wind.  The have nothing but a pistol to defend themselves against the men who stalk the road, the clothes they are waring, a cart of scavenged food - and each other.

Blurb taken from the back of the book.

I enjoyed this - as much as one can enjoy a scary post apocalyptic journey cross country.  McCarthy is almost lyrical in his writing, it reminds me of the ballads of Homer.  The way this is written helps with that general feeling also - lack of punctuation and no chapters.  It's like a story told in one giant, crazy, almost suffocating breath.  I think that McCarthy's desicion to not discuss the apocalyptic event that sent the father and son on their journey was the right choice.  In this story it's not about what has happened, but what's before the two characters.  I read this almost in one sitting, despite the subject matter it is an easy read, I didn't actually want to put it down, I wanted to know what happened to the them.

Be prepared to be horrified  Of course, one can guess at what type bad things father and son will run into, but it's not until you actually see the words on the page that it really sinks in, yes 'XXXX' is going to happen, (I'm attempting no spoilers, hence the XX bizzo).  But for all the horror and despair there is hope, love and joy, the smallest thing is a miracle - finding a can of coke, or food, just when they thought they wouldn't find anything.

The relationship between father and son is beautiful and I like that they don't have names, it adds to the story, brings it a strength and a belief, that this could truely be anyone.  And McCarthy did what I didn't think he was going to be able to do - I finished the story feeling hopeful.  All through the book I had in the back of my mind, this won't end well for anyone, but I was pleasantly surprised.

I haven't seen the movie version of this yet, but it's on my list of things to watch.  But I think it's going to be one of those movies where I need to be in the right mood.

What did everyone else thing of it? - the book or the movie.

Up next for February is: Be Near Me by Andrew O'Hagan.
Posted by Cataluna6 at 13:08