Be Near Me by Andrew O'Hagan - Book Club Read - February 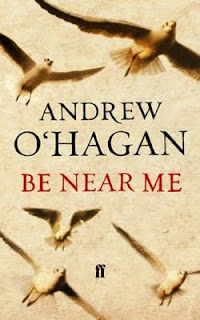 Be Near Me by Andrew O'Hagan

I have to admit, as far as the happy goes, our book club has picked some fairly dismal tales, from last months apocalyptic 'The Road', to next months WWII fable 'The Boy in the Striped Pyjamas'.  But first is 'Be Near Me', the story of an English priest in a small Scottish parish.  Behold...the blurb.  And bear with me, it's been a couple of months since I read this.

Over the spring and summer of 2003, Father David becomes friends with two young people, Mark and Lisa: by the year's end his life is the focus of public hysteria.

As he looks back to his childhood, and to Oxford in the fever of student revolt, Father David begins to reconsider the central events of his life and to see what may have happened to the political hopes of his generation.  Meanwhile, religious warfare breaks out on his doorstep.

I didn't particularly like this story, I thought it was well written, but it was just so damn bleak.  While reading it I felt the weight of the world, (seen through the characters), on my shoulders.  The characters of Mark and Lisa aren't terribly likeable.  They're selfish, rude, they steal and vandalise.  So you have to ask, why would Father David, befriend these kids - is it because he wants to help them, or is it because he's lonely and can't relate to the other adults in his parish.  I'm going with the second one by the way.  Apart from his relationship with his housekeeper, he doesn't seem to relate well to the other adults and I don't think he's happy with how his life has turned out.  The dinner he has with (I want to say bishop), a fellow priesty person is prime example.  His views on many things, Iraq for one - the war had only just begun - didn't seem in line with the Catholic church.  I'll say sorry again, I'm writing this from memory, so events are slightly fuzzy!

What I did love about this book, was after things had escalated with Father David and Mark and the 'religious warfare', you get to know the real Father David.  His early days at Oxford, I like this person, not that I disliked him later, I just felt he'd lost his way.  Ultimately, I don't think he ever really wanted to become a priest, and if certain events in his life didn't transpire, I don't think he would've become one.

Would I recommend the book after all that - yes.  I thought it was well written, and O'Hagan's ability to make me care about characters I didn't like is a good trait for an author to have.

As a book group we were lucky enough to meet the author, as he was on a book tour, promoting his latest book Maf the dog and his friend Marilyn Monroe.  O'Hagan wasn't at all like I expected him to be.  I think I still had Be Near Me resonating in my head, so I thought he'd be a sad, depressed, quiet man.  What he was instead, was a very funny man, with the gift of the gab.  I really enjoyed his description of his early life and his reading of Maf was great, complete with accents.

Until next time, when we tackle Nazi and 'The Boy in the striped pyjamas' I'll sign of and wish happy reading to all :)