A Forever Kind of Love by Shiloh Walker 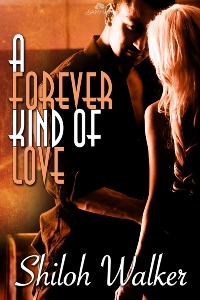 I was given a copy of this ebook in exchange for an honest review.
I've tried to write this without spoilers, but as awesome as I am, there may be some parts of the story that are mentioned.
A Forever Kind of Love by Shiloh Walker
Available in ebook from the 26th April, 2011.  From Samhain Publishing.
The ARC (PDF format), I received was 463K, 69 pgs, chock full of awesome.
You can always come home.  Second chances come a little harder.  Chase and Zoe were the high school golden couple.  Football captain, cheerleader, prom royalty.  After graduation, though, Chase couldn’t resist the urge to experience life outside their small town. He didn’t exactly expect Zoe to wait twelve years for him, but now that he’s back, he finds some small part of him hoping she did.  It’s no big surprise she’s married. The kick in the face is she married his best friend.  Zoe was devastated when Chase left, but she’s filed those bittersweet memories under “Moved On”. She loves her life, and loves her husband. She has all she needs. And Chase keeps an honorable distance.
One cold, wet, miserable day, tragedy turns Zoe’s world upside down. Chase never expected her to simply fall into his arms, but a man can dream. Except his dream doesn’t include the fact that this time, she’s the one hitting the road…and he’s the one left behind. (Blurb taken from author's website).
Warning: This story contains heartbreak, heartache and one last chance for two lovers to find each other.
First off I'd just like to thank Shiloh for giving me the ARC to review, I'm a big fan of her books, I can honestly say that there hasn't been one that I haven't liked yet.  But before it's even more evident that I'm her bitch - hand me my pen Sabu I feel a review coming on...
Once again Shiloh Walker has managed to write a story that is like a punch to the solar plexus.  She has an amazing talent for writing characters that are damaged or in need of a second chance. And she manages to write them without them becoming trite, one dimensional and unrealistic.
This story was a little personal for me, I identified with Zoe and some of the things she goes through, so on my first read, I was crying like a baby half way through.  But this is something that
I've come to expect from some of Shiloh's books, (in particular - No Longer Mine, Always Yours, Beautiful Girl, The Missing, Tempt Me).
Some ladies may hate Chase for leaving Zoe, but while he was a dick the way he went about leaving, I don't think the story would've been the same if he didn't - well duh!  Let me rephrase - Chase as a character, wouldn't have been the same.  I don't think he could've been the rock that he is if he'd stayed.  I also like that we met Chase first, that we got to hear his side, because once we're introduced to Zoe, there is more of a focus on her and what she's going through and what Chase is feeling for her.
I haven't spoken about Roger, mainly because I didn't like him.  I know he's going through stuff, but he seems like an arse - I'm not sure if that was Walker's intention, I certainly felt sympathy for the character - but beyond that, I didn't pay much attention.  This could also be because for Chase and Zoe to have their HEA he needs to be out of the picture.
I love that Zoe chooses to go away, for me it made sense, both as a way for her to heal and as a way for Chase to understand what Zoe would've felt when he left.  But damned if that whole scene isn't bittersweet and full of sexy pain.  Again, it didn't seem hoky, it was natural.
And then after the emotional rollercoaster, there's the squee.  Oh yes there's the SQUEE :)  I love Walker's consummation scenes, they're just so damn hawt!  This is light on in terms of the sexin', so if you're expecting it to be like some of her other titles, unexpect and keep reading, it's worth it.  This is more a story of reconnecting, of second chances and while the sexin' is part of that, it's not the whole story.
The only part I didn't love of this book was the ending - in that, I felt it ended too soon.  I felt kinda cheated, I wanted more dammit!  Yes, there was a HEA, but I wanted more of Zoe and Chase once they'd resolved their issues, I wanted to experience their HEA.  Which in part is because of the great writing, you're invested in the characters, you want something good to happen, and you want to be there when it happens.
One can live in hope that in all of Shiloh's spare time, (You gots teh bucket loads right??), she could write a sequel and let us know what's up *bat's eyelashes* - On second thoughts, *bakes cookies*, I've seen my eyelash batting and it ISN'T enticing at all.
So it's a hells yes from me, this was sexy, it was sad and just a little bit redemptive - but most importantly - it's what I've come to love about Shiloh Walker's stories, it's a beautiful, so real it hurts romance, with a sexy as hell hero and a stronger than she thinks she is leading lady.
Can't wait for the next one :)
C.
Posted by Cataluna6 at 03:46