No Longer Mine by Shiloh Walker 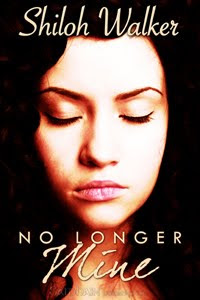 I was happily playing on the net on Sunday night, catching up on new book titles coming out and I found a most wonderful blog Leontine's Book Realm lots of lovely reviews and it was here that I found her review of No Longer Mine. So of course in this age of instant gratification I bought it from Amazon and in the twitch of a whisker there it was on my iPhone - imagine my delight! This was at 2 in the morning, I of course was going to be on my best behaviour and only read the first couple of chapters. That was before I started the story, once I started I didn't want to stop - I did at 5:30 in the morning, after I'd read the whole thing. Here's what all my fuss is about!

As usual, I've used the blurb from Amazon, cause Ima lazy biatch. This was purchased in ebook format, at the very affordable price of US $6.40.

One woman, one man, and a love that won't let either of them go.

Born on the wrong side of the tracks and dealt a fair share of hardship, Nikki Kline never gives up a fight. Even when her reason to keep going is ripped from her, Nikki tries desperately to hang on. But when the man who broke Nikki's heart comes back into her life she doesn't know how much she can take. Especially since that man seems determined to win back her damaged heart.

Wade Lightfoot is a man who knows he's made more mistakes than most. As much as he would like to repair the damage he's done to those he loves, Wade also knows there is no going back. But when he sets out to put things right the last thing he's prepared to find out is that he had a son. A son he'll never get the chance to meet.

When the truth is out and all the old wounds are bared, it seems impossible that Nikki and Wade will find their way back to each other. But true love is an undeniable force that even past hurts can't destroy.

This book has been previously published and has been revised from its original release.

Warning: This title contains heartbreaking tragedy, lies and deception, and a scorching passion that nothing can deny.

What can I say, this book had me as soon as I started reading it, from the first chapter I was hooked. I think I spent the majority of the book with my hand on my chest, having a little cry every now and then, it's just that kinda book, a little bit dramatic I know, but the story got to me. In most romance stories, the main characters don't have quite so much angst to deal with. This story seems to be heavier in subject matter than usual, I know that you need something that needs to be resolved for the characters to move on and I think anyone reading this would be hard pressed to not be moved by the story.

Walker does this without being too sentimental, it's written with honesty and feeling. It's heartbreaking without being too superficial or sentimental. I was wondering what it would be like as Walker herself had said it wasn't her finest writing, but to be honest I didn't even notice and normally shit like that annoys me, but I was too busy loving it.

There were a few times when the characters made me cranky, I was wanting to slap Wade upside the head Gibbs style. The scene with Wade and Leanne at dinner when Wade hears about Jason's death was particulary difficult to read and I found it hard to like him at that point. And while Nikki's stubborness was frustrating at times, it was refreshing that she wasn't just another character that just 'gives in', which often happens in these types of stories.

Then again, I could handle Walker drawing out the teasey bits as it made it all the sweeter when they finally get together, even if it's not 100% outta love on both sides. And as sexy bits go it was rather sexy, although slightly tamer than what I've been reading lately. But it read real to me, it wasn't over the top, just two people rediscovering, in all their hot nekkid glory, what they've lost and could have again if they can forgive each other. (As an aside, what's up with all the car sex?? It's all up in my shit lately, I think the last 3 or 4 books I've read have had some auto loving - not in the creepy "Mmm hello exhaust pipe" kinda way, but in the "Lets christen the car"!!).

I do wish that there was more, I would've loved to have been able to explore Nikki and Wade's world more. To see where they went after the final chapter. One can dream, I would also love to see a story between Dylan (Nikki's older brother) and Kris (her editor), as there seemed to be a story there.

Overall, this book is of teh awesome, I've actually read it through again, twice. I love it when you find a book like that. It's only made me want to read more of Walker's books, which are on my ever increasing Mt. TBR, which is threatening to topple and crush me in my sleep. Bring it on for Fragile and Broken, I wants to read them. Now.

P.S: FYI, I asked Walker if she was considering a sequel, with Dylan and Kris' story. And it's already out (and I had bought it the same night as NLM), colour me stupid!! So expect a review on Always Yours once I'm done. And yay! I don't have to wait to read it.
Posted by Cataluna6 at 23:26