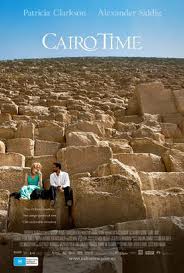 Cairo Time
Starring: Patricia Clarkson and Alexander Siddig.
Director: Ruba Nadda
Running Time: 86 Mins.
Juliette, a fashion magazine editor in her fifties, travels to Cairo to meet her husband, Mark, a UN official working in Gaza, for a three week vacation.  When he is unavoidably delayed, he sends his friend Tareq, who had been his security officer for many years, to escort her throughout the beautiful and exotic city.  The last thing anyone expects is that they will fall in love.
Cairo Time is a romantic drama about a brief, unexpected love affair that catches two people completely off guard.
I want to start this review by saying it’s nice to watch a movie with an Arab man who’s not trying to blow shit up.  In the media today, it’s impossible to miss the tension, the riots, the fighting that plagues that part of the world.  It was refreshing to see instead, these people portrayed in an ordinary setting, as a beautiful and dignified people.  Cairo Time is a beautiful love story with the lush landscape of Cairo and the pyramids as back drop.  It's renewed my interest in visiting the city.
This was a slowly unfolding story, nothing 'big' happens, and I love how Juliette (Clarkson) discovers Cairo, sometimes on her own, at other times with Tareq (Siddig).  They have fantastic chemistry together, which works well with the pace of the film.  Their magnetism is believable and it makes for some blazin' screen time.  And while they fall in love, it isn't acted upon and in part this is painful to watch - in a good way, bittersweet is the word I'm looking for!  But it is so much more effective and packs way more of a punch than if their romance was consummated.
Overall, this was a very enjoyable film, wonderfully acted and beautifully filmed.
Four Stars from the Russian Judge :)
C.
Posted by Cataluna6 at 16:04