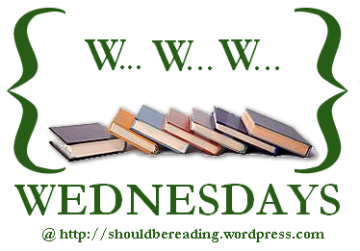 It's the week after Bout of Books has finished and I have to admit, since Sunday night, I haven't picked my book back up!  So tonight, I think I'm going to sit down and relax and read a few chapters.

WWW Wednesdays is hosted by Miz B over at ShouldBeReading.  If you'd like to join in here is what you need to do - answer these three questions:
* What are you currently reading?
* What did you just finish reading?
* What are you going to read next?
Then go and check out what everyone else who is participating is reading - I recommend you visit with pen at the ready, I always come away with new books to add to my Mt. TBR!

What are you currently reading?

On the last day of the readathon I started Half Bad by Sally Green, I've been itching to begin this and I'm so glad I did, I'm 90 pages in and loving it!  It's an interesting take on the witch genre, it's not so much about the magic, but more the politics surrounding the characters.  The main character Nathan is a half code - his mother was a white witch (good), his father a black witch (bad).  So he has to struggle constantly with everyone, including members of his family, telling him that he's 'bad'.  There is a lot of set up for Nathans character, which I'm loving, I really feel like I'm getting to know him.  The story is building up to Nathans 17th birthday, which is when witches come of age and receive three gifts.  I'm looking forward to where the story is taking me.

I'm also listening to Attachments by Rainbow Rowell.  It is so much fun, this is my first book by her.  While I'm listening to it I totally immersed - I need to keep reminding myself that it's set in 1999, it feels like a contemporary read.  I own her other two novels so I think I'll read them in the next couple of months as well.  I am loving the characters, and the back and forth between Beth and Jennifer reminds me of a friend I email with, so I'm connecting to the characters that way.  And I love Lincoln, his character is doing borderline creeper things, but I can't help it, he's adorable!  I'm enjoying it so much that I'm going to end up buying a print copy as well.


What did you just finish reading?

The 100 by Kass Morgan.  I just loved this, it opens on a spaceship a few centuries into the future, there was an apocalyptic event on Earth and a number of ships fled to space.  But the ships are breaking down and they need to see if Earth is habitable again - so who do they send?  A crack team of scientists?  Military convoy?  Ah no, they send 100 teenaged criminals, who's only other future is death on their 18th birthday.  This is told from multiple points of view, with the focus on Clarke, who was studying to be a doctor.  Wells, who betrayed Clarke and did something so that he'd be sent with Clarke to Earth.  Bellamy, who's sister is also being sent.  And Glass, who manages to escape off the ship before it leaves on its mission.  This wasn't too heavy on the sci-fi side of things, despite being on a ship, I think because there is more of a focus on the characters rediscovering earth.  They don't have laser beams or any advanced technology   I am waiting for the sequel, which should be out in September.  I am also looking forward to seeing the tv series.

What are you going to read next?

I placed a hold for Saga by Brian K. Vaughan, I've heard lots of good things about this on twitter and booktube and I loved Pride of Baghdad, so it's a no brainer for me.  All I know is that there is an intergalactic space war and the two main characters, from two different species have just had a baby together.  Beyond that I don't know anything, but I'm excited to find out!


I also have Under a Graveyard sky by John  Ringo, I've never read anything by him, this one is about a family who has to put their Zombie Action Plan it to motion - which is to set sail on the ocean to avoid the hoards of zombies!  It'll be interesting how sci-fi this book is, I don't tend to read a lot of it, but zombies - I love me some zombies!

And lastly, Norwegian by Night, which is the story of 82 year old Sheldon Horowitz, an ex-marine who is struggling with his past.  He's recently moved to Oslo to live with his grand daughter and her husband.  He witnesses the murder of a woman and then rescues/kidnaps her 6 year old son.  On the run from a Balkan gang and the Norwegian police the two form a bond despite not being able to speak the same language.  I originally heard of this on The First Tuesday Book Club and everyone was quite impressed, it sounds like an interesting premise for a book.


So that's my reading week so far, have you read any of these?  Let me know what you think.  Want to read something with me?  I like the idea of a buddy read - let me know!