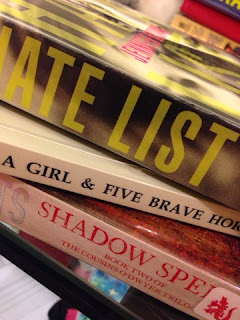 I haven't had too many holds arrive this week and I've tried not to look at books that have come in as I have my huge Bout of Books TBR and I have my new book club book - The Light Between Oceans by M. L. Stedman -  to finish.  But I may have to crack and start Shadow Spell, I've been waiting ages for it to arrive!

Blurbs are from Goodreads, 'cause I'm lazy like that.

Five months ago, Valerie Leftman's boyfriend, Nick, opened fire on their school cafeteria. Shot trying to stop him, Valerie inadvertently saved the life of a classmate, but was implicated in the shootings because of the list she helped create. A list of people and things she and Nick hated. The list he used to pick his targets.  Now, after a summer of seclusion, Val is forced to confront her guilt as she returns to school to complete her senior year. Haunted by the memory of the boyfriend she still loves and navigating rocky relationships with her family, former friends and the girl whose life she saved, Val must come to grips with the tragedy that took place and her role in it, in order to make amends and move on with her life.

I know this was a recommendation from someone - I just can't remember who.  It does sound interesting, so I'm going to give it a go.

This autobiography is the true story of Sonora Webster Carver who dove with horses from 40' towers in the 1920's. Dr. W.F. Carver, who ran the show, had previously started "The Wild West" shows with his friends, Buffalo Bill Cody and Wild Bill Hickok.

I have been wanting to read this for so long, ever since I saw Wild Hearts Can't Be Broken back when I was 11 or 12, so I most excited to start reading this.

With the legends and lore of Ireland running through his blood, falconer Connor O’Dwyer is proud to call County Mayo home. It’s where his sister, Branna, lives and works, where his cousin, Iona, has found true love, and where his childhood friends form a circle that can’t be broken….Meara Quinn is Branna’s best friend, a sister in all but blood. Her and Connor’s paths cross almost daily, as Connor takes tourists on hawk walks and Meara guides them on horseback across the lush countryside. She has the eyes of a gypsy and the body of a goddess…things Connor has always taken for granted—until his brush with death propels them into a quick, hot tangle.

This has been out since Easter and it's taken forever for the work holds to be filled!!  I excited to see where this series goes, although it is kinda predictable, I still enjoy it.  Plus it's set in Ireland - so I automatically love it.

Have you picked up anything exciting from your local library this week?  Let me know :)

Labels: Check it out, Mt. TBR