In celebration for my departure to Sydney on Thursday, I made a lemon tart to take to work.  I must stress - it's a cheats tart.  As per Jamie Oliver's instructions, (and I always do what Jamie says, except for when it comes to iceberg lettuce), I've used a store bought pastry casing.  While it's blind baking, which takes 10 minutes, give or take.  I mix 1 tin of condensed milk and 1 jar of lemon butter together, I used a masterfoods one this time and it was the consistency of jelly, which I wasn't really impressed with, but at the point of quality testing it tasted good.  I prefer to either make my own or buy from the lovely lady at the farmers market.  But time was short and I was lazy!  Once this is thoroughly mixed, place into browned casing, then put it back into oven, I usually put it in for another 10 minutes, but that's because my oven likes to kill things. 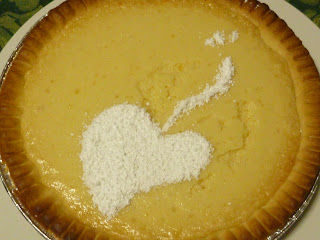 So this is where the exploding part of the tart comes in - I often joke with a friend from work about the romance novels I read and how there's lots of 'exploding' at certain times - anyone who reads Lora Leigh will know what I mean!  Anyway, since it's a romance convention I'm going to and there's bound to be a whole weekend of exploding I added the heart shaped 'bomb'.
These are the things that happen, late at night when I'm bored and have been drinking vodka.  Go with it - it's much safer that way O.o 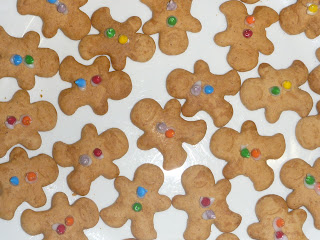 And while I was waiting for my tart to cook, I decided to decorate these little ginger bread guys.  It was for an earlier post and I wanted a picture.  Anyway, these are kind of fiddly and I've since decided it would be much better to leave these for when I can use enforced child labour.  But until then, I did have to use my boning tweezers.  And vodka - hence the Quasimodo of the gingerbread land below!  Originally, I did tell myself it was to cover up his shame at being all blobby and conjoined together, but then I fessed up that it was more because I was lacking much needed hand eye coordination and plus I  like me some icing and the little choc thingys. 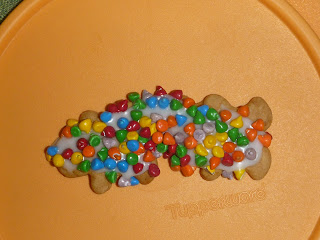