No One Lives - DVD Review 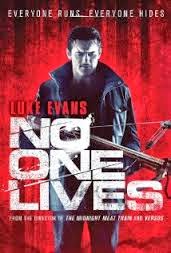 A gang of ruthless highway killers kidnap a wealthy couple traveling cross country only to shockingly discover that things are not what they seem.

Here is the link for the IMDb page.

I knew nothing going in to this movie, all I knew was that it had Luke Evans in it, I didn't read the blurb, he is lovely, so I got it.  Was I in for an eye opener!  I kinda figured that maybe Mr. Evans was a not so nice guy, he is after all, holding a crossbow on the cover.  And I guessed correctly, as the short blurb from IMDb says, things are not what they seem.

I would like to point out - if gore and violence are not your thing, I suggest that you skip this.  There is quite a bit of blood, stabby bid'ness and a rather jaw dropping "ARE YOU FRACKING KIDDING ME!!" scene - you will know it when you get to it.  I wouldn't call this a horror, it's more of a cross between a gorno and a psychological thriller.  But as a fan of this genre, (I *know* who would of thought that 'nice library lady' would like blood and guts!), this was big, blood drenched fun.  As a side note, in the special features they talk about how they made this film using old techniques, rather than CGI, and I found it interesting to learn about.  Also, I may want a pool filled with fake blood to potter around in.

This is essentially a revenge film and it's hard to go into too much of the story as I don't want to give anything away, I think it was more enjoyable not knowing much back story.  But Driver, after watching his lady love die, swears bloody revenge and vows that "No one lives."  I liked this more than the endless Hostel and Saw movies that have come out, (barring the first Saw - I thought that was very well done).  Yes, there is killing out the wahzoo , but I don't feel like it's lazy storytelling.  Whereas in the other movies, once they're strapped to a chair, that's it, no more story, it's just how many different ways can we slice and dice.

It's fast paced, the beginning is suspenseful, you think the movie will unfold a certain way, but things get twisted around and the movie becomes something different.  I thought the acting was good, Evans does menacing well, apart from a couple of faces, most of the cast was unknown to me.  Azumi is the only other movie I've seen by Ryuhei Kitamura, but apparently Versus is very good, so I'll be checking that out also.

What about you, watched anything good lately?