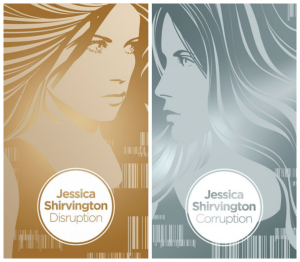 Both Disruption and Corruption fast paced reads,  I NEEDED to know what was happening.  I like the characters, the story didn't get too tropey and I had fun listening to both books.  I didn't love The Violet Eden Chapters, Shirvington's other series, so I was unsure what I would think of this and that is partly why I took so long to read it.  But I enjoyed this so much more.

Both books are set in a dystopian world, (and I am a sucker for those.  I think it's that extreme situations bring out the best, and worst, in people.  If the author can write well, they can craft amazing worlds with kick arse characters.  Or maybe I just want to watch the world burn while I read about it from the comfort of my sealy posturepedic wonderland.  Although this isn't 'everything has gone to hell and Maggie is eating burned bread' kinda dystopian.  Maybe I should call it futuristic? Prophetic perhaps,  After all, these days most people are wearing fitbits or smart watches.  In this series everyone legally has to wear an M-band, which monitors everything basically.  Once you're of age, you get to upgrade your band and use pheromones to find a favourable match.  Those with negative ratings, or 'Negs' get taken away for "rehabilitation"...notice I use "" we all know that isn't going to end as they say it does.

For some time before the story starts for us, Maggie has been searching for her father, a scientist that one day gives off a Neg rating and is taken away.  Her whole world changes and rather than forget about her father, she sets out to try and find him.  What she finds is a lot more than she bargained for.

Maggie Stevens is one of those characters, she's strong, flawed and not entirely likable.  But I don't need a character to be that or relatable for me to enjoy the story.  I just need them to not be idjits aka TSTL.  Maggie makes stupid mistakes, but she owns them, she isn't whiny, she doesn't pout and she gets shit done.  She's dogmatic and dedicated in her task - the fallout of that is evident in Corruption. And the sass!  The snark!  I love it.

Quentin Mercer, be still my heart, from the start I knew that I would like him.  Obviously we as the reader, is clued in that he is going to be more than just the heir to M-Corp empire, you know underneath the usual posturing, privileged school boy - he's going to be a nice guy.

This being YA and dystopian, we know it has to have some romance and thank you Shirvington - it's not instalove!  You know where Maggie and Quentin's relationship is heading, but it was wonderful to read it all unfolding.  That build up and acknowledgement of something they don't quite understand and didn't expect to feel for each other.  I did almost have an a conniption when there was a hint of a love triangle, but thankfully it is resolved pretty quickly.

The review wouldn't be complete without mentioning Gus, he is a tech wizard and is instrumental in Maggie's plan to find her father.  Maggie is blackmailing Gus, (she does that a lot), and the way he and Maggie bounce off of each other is great.  There are plenty of funny moments thanks to him.  And his and Maggie's relationship starts of with hate and ends up as the best kind of friendship.

Disruption ends on a major cliffhanger, I recommend having the next book ready to go, I was stalking my holds until it arrived.  Thankfully I only had to wait a few days.  I don't know what I would've done if I'd read the first book when it first came out.

Corruption continues almost immediately where we leave off.  As I mentioned before, we get to see the consequences of Maggie's actions and how she deals with it all.  The first book is all about finding out what is going on, the second is using that knowledge to do something about it.  There are a lot more characters that are introduced in the second book, many of them help to move the story along, so we don't really get to know much about them.  I think if this was a continuing series I would want more from the background characters.

I thoroughly enjoyed both Disruption and Corruptions, for me this was a satisfying end to the duology.  That said I would not say no to reading more from Maggie and Quentin.

Both books were narrated by Hannah Norris, hats off to her, she did a great job.