Yes you read that right, no soap in 1 1/2 years (But I promise I have been showering - and with soap). You might ask why? How does that happen? To be honest I'm not quite sure how I became a soap hoarder, although I'd like to point out some soap has been given as presents and of course there is the obligatory hotel soap. But apparently I can't pass up a soapy bargain!!

When I moved out in Jan '12 I discovered I had a lot of soap, when I was unpacking I found more, then I found some more and sadly after that - I found more. On one hand it was good, I was set for soap for who know how long...the photo below is whats left of my soap after 1 1/2 years.

On the other hand, just how had I managed to buy that much? I can't say 'waste my money', as I'm going to use it all - no matter how long it takes me 😳 but why did I feel the need to spend that much on soap? I've asked myself this a lot since I moved out on my own; those first few months after I moved out I dutifully scanned the supermarket catalogues, looking for specials, comparing prices, making lists of items I needed (or didn't).

Then one night, as I was putting groceries away, I discovered I had that much crap in my pantry, that I had to shove it on top other stuff I bought last week and hadn't used yet. What was the point of buying all of that if I didn't need it right then? Convenience is one answer and I agree to a point. But where does convenience end and food hoarding start? Because that's it basically. I'm sure I don't need 16+ cans of tuna - and I'm not including the half doz that I have at work for lunch. I'll admit that particular slice of craziness is mostly because of my chrisco/castle orders. In an effort to eat better I changed a baking and biscuit order to tuna and Mexican. So now I've got a shelf full of tuna, tortillas, taco shells and more jars of salsa than I care to count. On the bright side - it's not 18 packets of biscuits, 'cause trust me - my arse really can't take that 😏

Where am I going with all this? (I tend to ramble, I know), well my great epiphany was this - I don't need to buy all this, I don't need to scan catalogues each week, they're not really specials because 9 times outta 10, you don't need it - or you don't need the 3 extra you have to buy to get the special. Since then, I've tried to stop buying just for the sake of buying, even if that's what they want you to do. I have a lovely fresh fruit & vegie man that delivers to my work, I try to buy my meat in bulk and if I can, I get all my other stuff (milk, yogurt), in one visit. I don't go each night after work and I try to avoid going when I'm hungry and haven't had dinner yet.

And amazingly it's worked, I don't buy as much as I used to, I'm actually emptying my pantry, (although it doesn't look like it at the moment thanks to last years chrisco/castle order. Which I'm happy to report I've since cancelled - I'm still making my way through sugar from 2011, I really don't need any more - trying to explain that to the consultant was quite funny, his comment of "but you're supposed to use it over Christmas." I told him there's only so much sugar a girl can eat and that's why I need a break from ordering anything. And really, the chrisco/castle has come in handy as I've given some to friends and family or for the soup kitchen I volunteer at, a lot of the pasta and rice has gone into the meals I prepare for that. And that is not a waste.

Maybe it's because I'm on my own for the first time and I had to move into a 3 bedroom house to fit all my crap in, maybe I'm having a pre-midlife crisis, maybe it's that season of Hoarders I watched. I don't exactly know, but I feel the need to downsize, to remove the things I don't need, I've sent plenty of stuff off to goodwill and I still have more that I need to go through. I've got a homemade, homegrown, make do & mend vibe going on. I still slip up occasionally and buy something I don't need, but want, (I'm looking at the new stack of books I got last week as evidence), but I look at them and think it could be worse...I could've bought another can of tuna!! 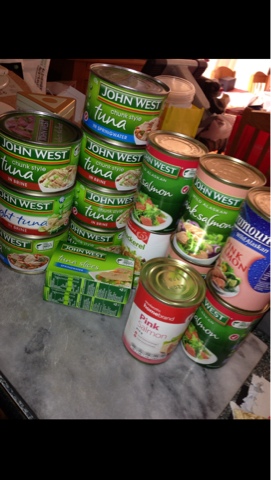 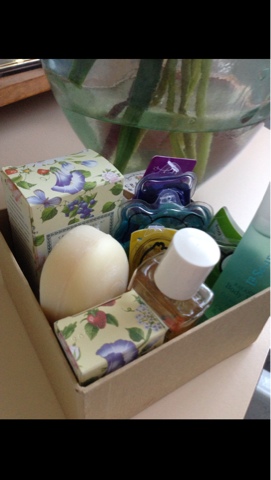