I've never done a mailbox post before, but since I got three shiny new books in the mail noes the perfect opportunity!

I'm a fan of Jo Davis' Firefighters of Station Five, and the author writes in a few different genres, the ones I got today were paranormal romances under her J.D. Tyler name in the new Alpha Pack series.

Founded by a group of former Navy SEALs, The Alpha Pack is a top secret team of wolf shifters with Psy powers tasked with eliminating the most dangerous predators in the world. But the gift of their abilities comes at a price...


This is the excerpt that sealed the deal for me: “Nice puppy,” she crooned again, voice wobbling. Holding out a shaking hand, she tried a command. “Stay!” The beast stopped, cocked his head, an almost bemused expression on his canine face. “Good boy. Sit!”  He did.  Some of her fear began to ease and she wondered how well trained the animal was. Maybe he was someone’s guard dog that got lost? He’d certainly protected her from those bastards. “Roll over.”  At that, the creature’s form began to waver. Sort of reshape. She blinked rapidly, thinking there must be something wrong with her vision. But no, she was simply losing her mind after all, because fur retracted, became skin. Paws became hands and feet with very human limbs attached. Tufted black ears went away, the snout disappeared and was suddenly a regal nose.
And now, a black-haired man crouched where the wolf had been seconds ago. A big, very naked man who unfolded his tall body and gazed down at her, one corner of his mouth quirking upward.
“I’ll do a lot of things on command,” he drawled lazily. “But I don’t roll over for anyone, sweetheart.”
SQUEEEEE...

After a massacre decimates half his team and leaves him crippled, Jaxon Law must relearn how to fight - and battle the anger and guilt threatening to overwhelm him. But when he rescues a beautiful woman no awakens his primal instincts, Jax is unprepared for the dangers that lie ahead.

On the run from her employer, brilliant lab assistant Kira Locke has evidence that leads Alpha Pack on a hunt for someone targeting human civilians with Psy abilities. And as Jax and Kira circle both the killer and each other, Jax will have to decide if the deep connection be feels with Kira is worth breaking the ultimate shifter rule - because bonding with Kira means putting his abilities at risk , and they might be the only tools he has to keep his mate alive...

After a mission goes terribly wrong, Aric Savage is taken prisoner. Tortured to the brink of despair, he makes a stunning discovery: his pack mate Micah Chase, who was reported dead, is a fellow captive. Equally shocking is that when Alpha team arrives in full rescue mode, they are accompanied by a woman - an absolute stunner with sable hair and a spine of solid steel.

LAPD officer and Psy Dreamwalker Rowan Chase has one priority: her brother Micah's recovery. Still, she can't help but be drawn to Aric, the ruggedly handsome wolf shifter who pleasures her as no man ever has - however fleeting their affair is destined to be. But when Aric's life is endangered, Rowan must ask herself what she's willing to sacrifice in the name of love.

Ever since he saved Dr. Mackenzie Grant's life, panther shifter and sorcerer Kalen Black has bad trouble keeping the beautiful doctor out of his thoughts - and his heart. The brush with death awakened an intense passion between them - one that for the first time has the notorious loner letting his guard down.

With the Alpha Pack battling an evil Fae who is slowly gaining control over Kalen's mind, Kalen can no longer trust his own actions, so he breaks off his affair with Mackenzie in order to keep her safe. But when Mackenzie learns that she is carrying Kalen's child, no amount of danger will keep her away from the man she loves. To protect his mate and unborn child, Kalen will have to battle a terrible evil, unleash the full fury of his power, and risk destroying them all.

So there you have it, I'm really looking forward to starting this series - but I need to finish a couple other books first. I'm so bad, I keep starting new books cause I just wanna read them all!!!! 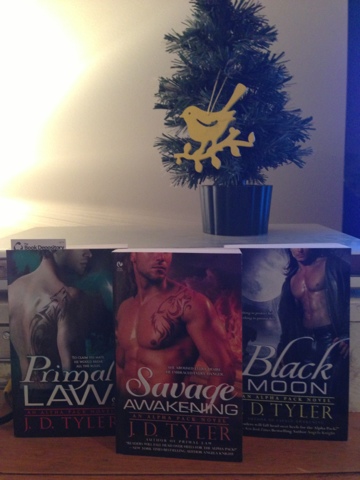